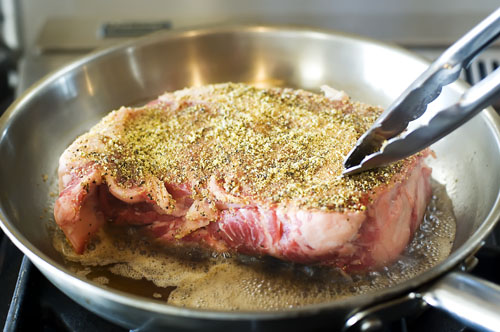 How to Reduce Carcinogens in Your Steak

Cooking meat has several benefits: killing bacteria, making it easily digestible, improving texture, and probably most expected- improving flavor. But did you know compounds in your meat change during the heating process and become carcinogenic? The formation of carcinogens is a result of the reaction between creatine (muscle energy), free amino acids (building blocks of protein in meat) and sugars, such as flour or corn starch for example if you are braising your meat on the pan. Don’t panic –there is a way to reduce this carcinogenic process.

In the last year, there were several studies done specifically investigating the reduction of the carcinogen called Heterocyclic Aromatic Amines. These days it would be hard to surprise anyone saying that antioxidants have power to reduce oxidation and reduce risk of cancer. Therefore, it will not be a surprise for anyone that researchers started to search for something to reduce the carcinogen by adding foods that are rich in antioxidants. Sauces, herbs and spices are good sources of antioxidants that are easy to spread over the meat when cooking it on the pan or roasting it. Additionally, scientists investigated individually: olive oil, tomato, garlic, rosemary, thyme, sage, and brine. Results showed the reduction in formation of some carcinogens in the meat. Scientist also tried marinating meat before cooking with red wine, beer and green tea, which actually showed to be a very effective method of reduction of carcinogenesis. This is very exciting news. But what if you like your beef to be marinated let’s say in something like beer or wine and maybe also add some herbs in it; would it reduce even more carcinogens?

The latest study that was published by ACS Inhibitory Effect of Antioxidant-Rich Marinades on the Formation of Heterocyclic Aromatic Amines in Pan-fried Beef was investigated by Olga Viegas et al. The research team was investigating the effect of marinade, herbs, wine, dealcoholized wine with herbs, dealcoholized wine without herbs, beer with herbs, and beer without herbs on the pan-fried beef steak. The research group concluded that all of the above marinades showed reduction of the amounts of carcinogens. But, beer marinade showed to be more efficient than white wine marinades, and the addition of herbs to these marinades showed even better protective results –reducing around 90% of these Heterocyclic Aromatic Amines. Best results were shown after marinating meat for over 4 hours. So, enjoy your healthy flavorful steak after marinating it for 4 hours in your favorite marinade.

Filed Under: Cancer, Foods, Nutrition, Nutrition News, Proteins
← Power of Milk
Natural Food Colors – Maybe Not What You Expect, Unless You Expect Insects in Your Fruit Juices, Yogurts and More. →