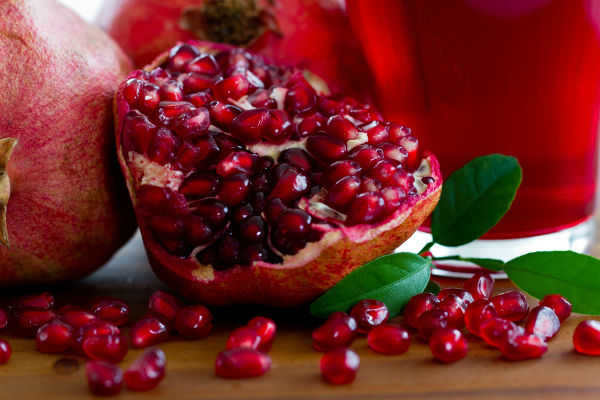 Pomegranate, Good for Whatever Ails You

The scientific name of pomegranate, Punica granatum, is derived from the name Pomum (apple) and Granatus (grainy), or seeded apple. It is believed that the origin of the pomegranate is from Central Asia. Historically, this fruit is reported to be domesticated and planned between 4000 and 3000BC and among one of the oldest known edible fruits that is even mentioned in the Bible and the Koran.

So why is this fruit still so popular even today? We sell about 1.5 million tons of the fruit in the word annually. The research on pomegranate has been steadily increasing from 209 studies in 2008, 258 in 2009, 341 in 2010, to 444 in 2011. Pomegranate is not only used as a fruit, or coloring of fabric and leather but, probably most importantly, it has been used as a herbal healer since ancient times. Due to immense potential for health benefits, pomegranate has achieved the title of “super-food.” It is also claimed to be the “elixir of youth.”

There are only 72 Cal of energy, 1g protein, 16.6g carbohydrate, 1mg sodium, 379 mg potassium, 13mg calcium, 12mg magnesium, 0.7mg iron, 0.17mg copper, 0.3 mg niacin and 7mg vitamin C in about 100g of pomegranate juice. It seems like not a very nutritious product. But, the pharmaceutical, pharmacological and medicinal bioactivities of compounds (including tannins, flavonoids, alkaloids, organic acids, interpenes and steroids, etc.) from different parts of this fruit makes this fruit hypolipidemic, antioxidant, antiviral, anti-neoplastic, anticancer, antibacterial, anti-diabetic, anti-diarrheal, helminthic, vascular and digestive protective, and an immunomodulator. In Ayuverdic medicine, pomegranate is used as an antiparasitic agent, as blood tonic and for healing ulcers and as an anti-diarrhea agent. In fact some studies found pomegranate to be useful for treatment of coronary heart diseases, cancer (skin, breast, prostate and colon), inflammation, hyperlipidemia, diabetes, cardiac disorders, hypoxia, ischemia, aging, brain disorders, liver damage and AIDS. Pomegranate was also found to be clinically effective in treatment of depression and bone loss in menopausal syndrome in women. Pomegranate peel is found to have anti-microbial effects on bacteria, fungi and even few viruses. Amongst the selected bacterial and fungal cultures, the highest anti-microbial activity was recorded against Staphylococcue aureus, Aspergillus niger, and Pseodomonas stutzeri. The antibacterial effect of the pomegranate extract was 23.4-fold higher than in the pomegranate juice. The highest metal-chelating capacity was observed in the pomegranate peel, 37.22%, compared to the fruit,7.151%.

Try these healthy recipes with pomegranate: