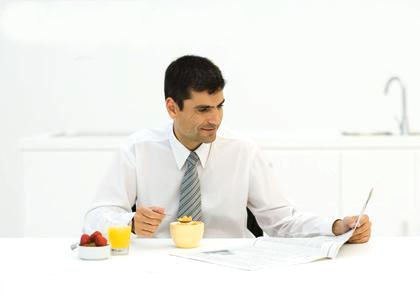 “Beep beep beep”— this familiar sound wakes many in the morning in order to make it to work on time.  Who doesn’t love the snooze button?  Although this increases sleep time, it also decreases the amount of time one has to get ready, often resulting in skipping breakfast.  A prospective study done showed that men who skip breakfast may have an increased risk of coronary heart disease (CHD).

In a study, 26,902 male health professionals were given a food frequency questionnaire and were then followed over the course of 16 years (1992-2008).   During these 16 years there were 1,527 reported incidents of CHD.  Researchers found that the men who skipped breakfast had a 27 % increased chance of heart attack or death from CHD.

This study is questionnaire based, which gives it a little bias because who doesn’t stretch the truth sometimes when wanting to make it look like they eat healthier than they really do?  There may also be other factors contributing to risk of CHD including exercise or genetic factors.

It has been said many times that breakfast is the most important meal. It can kick start your metabolism in the morning and it may lower your risk for CHD. If you have troubles finding time in the morning to eat, start small by grabbing a granola bar or eat some yogurt.