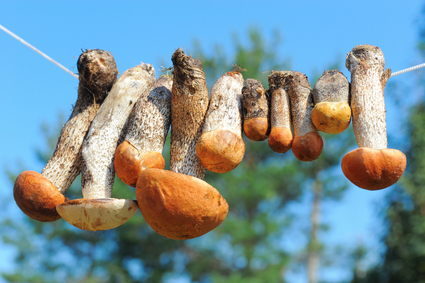 Sunshine or Mushrooms for vitamin D?

Land vertebrates, including humans required vitamin D to maintain adequate serum Calcium and bone metabolism. Sun light /or UV light has been known for years to naturally increase vitamin D in the blood and this way to cure Rickets. Scientists claim that mushrooms can be as effective as sun or supplements to provide us with vitamin D. You may wonder why mushrooms. Very few foods naturally have considerable amounts vitamin D (about 1000-2000IU/serving), those on the top of the list are: the famous Rickets’ treatment (cod liver), fish oil, herring and salmon. There are some other fish that have some vitamin D but it occurs in much lesser amounts. So, what’s similarity between fish and mushrooms, and why mushrooms contain the highest amount of vitamin D of all plants on the land?

It is theorized that 900 million years ago primitive life forms were bombarded by the sun’s UV radiation, between 240-320nm, damaging their DNA and RNA. Thus, the sunscreen – provitamin D2 may have played an important role in survival of those organisms. Phytoplankton and zooplankton that produced vitamin D2 were likely to protect their DNA and RNA from UV radiation and were able to pass their genes to their offspring. It explains why fish fed phytoplankton at the bottom of the ocean have the highest amounts of vitamin D. Fungi- like phytoplankton produce large amounts of vitamin D2 when exposed to UV radiation. This explains why mushrooms are good candidate to have a high capacity to produce vitamin D.

Mushrooms are known to contain provitamin D2 which can be converted to previtamin D2 when exposed to UV radiation. Previtamin D2 in mushrooms can rapidly be converted to vitamin D2. But so far, science has been debating whether vitamin D2 increases or decreases 25 (OH)D blood concentration. Stephenson et al. found in their study that ingesting UVB radiated mushrooms containing vitamin D2 resulted in a small decrease in total 25(OH) D levels. Thus to investigate this question, Department of Medicine: Vitamin D, Skin and Bone Research Laboratory conducted their own study. They also reevaluated the statement that vitamin D2 is the only source of vitamin D in the mushrooms. The research team revealed that only 5 minutes of exposure to UV radiation was required for conversion provitamin D2 to previtamin D2. But according to previous study cited in this literature, it is a time dependent process to convert previtamin D2 to vitamin D2, and there was only 24% of vitamin D converted after 6h radiation, compared to 50% after 11.5 hours in white button mushrooms. On the other hand, scientists mention that the amount of converted vitamin D2 depends on the type of mushroom as well, for example 19% of vitamin D2 has been found in ampoules after 11.5hours radiation. So, another words if you want to receive vitamin D2 from your white button mushrooms, you may want to lay them out in sunshine (or other UV light) and the exposure should take about 12hours for conversion of only half of previtamin D2 to vitamin D2. But if you have a different type of mushroom, the time of the process may be different.

Keegan et al. also investigated the question of efficacy of vitamin D2 from white button mushroom compare to supplemental vitamin D3. Thirty participants were randomly divided into 3 groups: 1st group ingested capsule 2000 IU vitamin D2, 2nd-2000 IU vitamin D3, and 3d group ingested 2000 IU mushroom vitamin D2 once a day for 3 months during the winter. The Vitamin Ds concentrations were measured once a week for 12 weeks. “At the end of 12 weeks, serum total 25 (OH)D levels were not statistically significantly different in all three groups: 34.4ng/ml, 29.2ng/ml and 30.1ng/ml for supplemental vitamin D3, D2, and mushroom D2 respectively.” Which demonstrates that mushroom containing D2 was as effective to maintain 25(OH) D levels as supplement vitamin D2 and vitamin D3. So while the summer’s sun can provide us up to 10,000IU within 15-30 min, mushrooms can provide us up to 4,000IU/serving during the winter. Just remember to expose your mushrooms gills up to UV light for at least 12 hours.

4 Responses to Sunshine or Mushrooms for vitamin D?