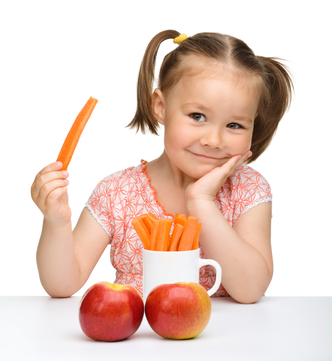 Getting young children to eat fruits and vegetables is a challenge that many parents face. Faced with this challenge parents have come up with a variety of ways to get their children to eat their fruits and vegetables. One common trick is to offer the child a reward to get them to try a bite of a disliked food, however in the past some researchers have suggested this may backfire and cause the child to dislike the food they are being rewarded for eating. A 2011 study, “Eating for pleasure or profit: the effects of incentives on children’s enjoyment of vegetables”, tested the effect of offering rewards on both children’s self-assessed liking and actual consumption of a previously disliked vegetable (1). The results of this study show that parents of picky eaters can effectively use stickers as a reward to help their young child overcome their dislike of specific foods, without it later backfiring.

The study included 422 children between ages 4 and 6. The children participated in a taste test at the beginning of the study where they rated their liking of several different vegetables. A disliked vegetable was selected for each child and the children were broken into groups for 12 days to test different interventions to increase their liking and consumption of the disliked vegetable. The groups included: offering a sticker for trying a taste, offering verbal praise (for example saying “you’re a great taster”) for trying a taste, offering the vegetable with minimal social interaction, and a control group that received no intervention. All of the interventions were found to effectively increase self-assessed liking for the vegetable (p<.05) compared to the control group. The stickers and verbal praise, however, were found to be the most effective at getting the children to eat more of the target vegetable over the long term (1).

One advantage of this study over many past studies is that it was done in a school based setting, rather than a controlled laboratory setting. This allowed for the conditions to be closer to a real life setting than many past studies. While the results of this study are optimistic, it does not imply that rewards will work for every child. It is also important to note that this study was done in a controlled, school based environment and the researchers offering the vegetables were unfamiliar to the children, so the results may be different in a home setting with the rewards being offered by parents (1).

This study is significant because earlier studies done in the 1980’s had suggested that rewarding children for eating specific foods could have a negative impact on their future liking of that food (2). A major difference between those studies and this study is that the early studies rewarded children for consuming foods they already liked, such as flavored milk beverages (2). One of the first major studies to challenge the negative impact of rewards was a 2003 study comparing the effects of rewards and exposure at increasing liking and consumption of red bell peppers, a food commonly disliked by children. The study showed that rewards did not have a negative impact on liking when the target food was initially disliked (3). This 2011 study built upon the 2003 study and confirmed that rewards do not have a negative impact on liking when the target food is initially disliked and may actually increase liking for previously disliked foods (1). A 2012 home-based follow-up version of this 2011 study found that in a home setting where parents are offering the rewards stickers are more effective than verbal praise at increasing intake and liking of vegetables (4).

The results of this study show rewards to be an effective tool for getting children to try unfamiliar or disliked fruits and vegetables. Although this method may not be effective for all children, this study confirms that rewarding children for eating a disliked fruit or vegetable will not cause them to dislike it more. Follow up studies also suggest that verbal praise is not effective in a home setting, so parents seeking to increase their young child’s fruit and vegetable consumption may have better success using stickers. Stickers are most effective when they are used to encourage young children to try small tastes of fruits and vegetables over about 10-15 tasting opportunities.

Filed Under: Childrens Health, Nutrition
← Can Chia Seed Improve Your Health and Lower Your Weight?
A Mediterranean Cruise is Good for the Heart →