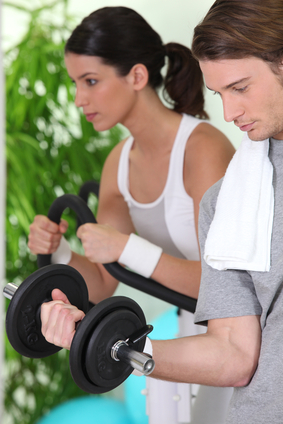 Caffeine Use for Aerobic Exercise

For decades endurance athletes, who rely on their aerobic energy systems, have been using caffeine as an ergogenic aid to increase the time it takes to reach exhaustion.  The purpose of this research article was to determine if there is a difference between the ergogenic effects of caffeine on endurance trained and untrained individuals.

This study is one of few to research caffeine’s effect on time to exhaustion (TTE) in both trained and untrained individuals. While the researchers showed no statistically significant ergogenic aid provided by caffeine consumption, the results averaged times did show improvement. When considering the implications of this study it is important to remember that the small sample size and duration of exercise may have limited the outcome of the research.

It is also important not to forget that the main purpose of the study was to address how caffeine consumption benefited untrained individuals compared to trained individuals. Despite the statistically insignificant results, the Caffeine Trial (which consumed 5mg/kg body weight of caffeine) of the Untrained Group did perform better than the Placebo Trail, and showed an even greater increase in TTE than the trained group. This is promising, and more research should be done to test caffeine as an ergogenic aid in untrained individuals to build upon these results.

Read Study Details:
The participants in this study consisted of 20 males in their low to mid-twenties. Using percentiles determined by the American College of Sports Medicine the researches divided the participants into two groups of 10. The participant’s preparation for the testing consisted of a health history questionnaire, reporting any medications and performance enhancers that may affect results, and abstaining from caffeine and strenuous exercise leading up to the trails. Half hour before testing the participants consumed 5 mg/kg of caffeine or a placebo. Testing was performed in the morning, at the same time of day for each individual, and consisted of a cycle ergometer test at 80% predicted max workload for time until exhaustion was reached. Each subject was tested twice, with 48-72 hours rest in between sessions. The research followed a  double-blind, placebo-controlled crossover experimental design and a Two-Way analysis of variance was used to analyze the results, both between the Trained and Untrained Group and between the Caffeine and Placebo Trials (P≤0.05 for it to be statistically significant).
Filed Under: Fitness and Exercise, Helpful Tips, Nutrition, Supplements and Nutraceuticals
← Saturated Fat May Be Safe for the Heart and Arteries
Pumpkin Cookies →