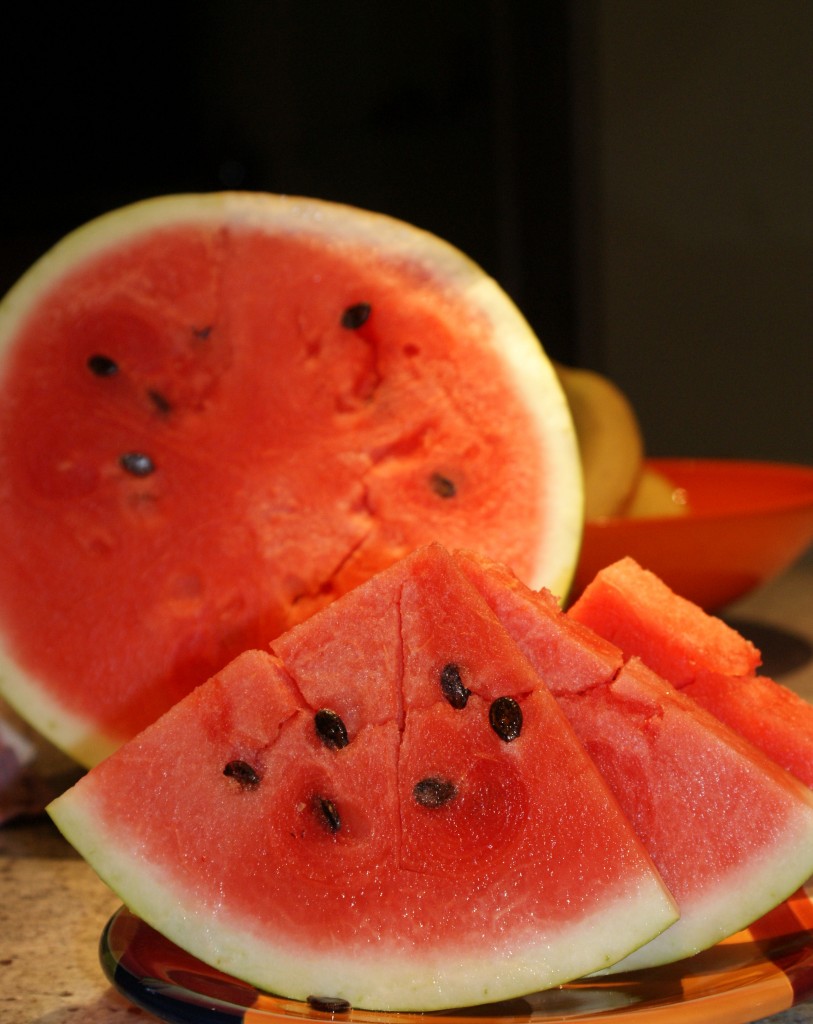 What comes to your mind when you hear the word “watermelon”? Sweet, juicy, pink fruit, childhood, sunshine, picnic, pool party, and so on? Whatever it is, it is probably not associated with the gym, vitamins A, B6, C or people in a desert. There is so much more about the watermelon than just a sweet juicy flavor of this fruit.
This fruit has deep historic roots that go back to the second millennium BC. Watermelon was found at Twelfth Dynasty sites and in the tomb of Pharaoh Tutankhamen in Egypt. Also, it was mentioned in the Bible as a food eaten by the ancient Israelites while they were in bondage in Egypt. Watermelon was also carried on long caravan trips. Do you wonder why this fruit was so popular in those centuries and how it survived to this day? Watermelon has good hydrating properties, which was very useful to the long voyages or hot/dry climates, also it’s a great source of vitamins such as A, B6 and C, helping to boost immunity to fight infections and viruses, maintaining optimal nerve function and involved in forming red blood cells to increase anaerobic performance. However, these are not the only properties of the watermelon. Scientists began looking into the watermelon’s properties in the early 19th century and there was a lot found out since that time.

The Latin word for watermelon is citrullus. Citrullene is an α-amino acid, which was named after the watermelon, was discovered in 1930s. Citrullene is also known as a key intermediate in the urea cycle. Citrulline was found to be an excellent candidate to treat some health problems such as hypertension, heart failure, atherosclerosis, sickle cell disease, sexual stamina and erectile functions. Additionally, scientists suggest that L-citrulline can improve athletic performance, accelerate lactic acid removal (aiding in faster recovery after each workout), also 5g/kg/day can induce an increase in muscle protein synthesis rate, increasing protein, and can aid in smooth muscle relaxation. Citrulline malate was found to increase levels of arginine and ornithine (allowing muscle growth) and influence levels of growth hormone, also (8g/day) was found to enhance athletic anaerobic performance and relieve muscle soreness. These findings may just explain why this fruit was so popular in those centuries. Scientists may have just found one more property of this fruit that may have helped our ancestors make long voyages possible.

Journal of Agricultural and Food Chemistry published the study “Watermelon Juice: Potential Functional Drink for Sore Muscle Relief in Athletes.” Tarazona-Diaz et al. investigated the efficacy of the watermelon juice to reduce soreness in athletes. The study was conducted in vitro and vivo.

The vitro part of the study revealed that the absorption of L-citrulline in the Natural Watermelon (NW) juice was greater than in the control (sugar- water). Additionally, the study showed that absorption of NW was higher than that of the Pasteurized Watermelon (PW) juice. NW juice was also absorbed quicker than PW juice which suggests that bioavailability of the pasteurized watermelon juice may be limited by its intestinal absorption. In other words, to increase effect, you should consume fresh squeezed watermelon juice, because it is more bioavailable than pasteurized.

Research team randomly divided their participants onto three groups which received 1) Natural Watermelon (NW) juice contained 1.17g/500ml of citrulline from watermelon, 2) Pasteurized juice (PW), and 3) placebo group that did not receive citrulline, but sweet watermelon flavored water. For the vivo part, participants (students of sport science) had to do a pedaling test. It is believed that pedaling at 90-100 revolutions per minute causes less muscle fatigue than lower (48-73) at which participants were pedaling. In other words, participants were expected to have muscle fatigue. There was no significant difference in pedaling speed observed between PW and the control groups, the NW juice group showed slightly increased speed, suggesting citrulline may be associated with increased speed in those subjects. Participants’ muscle soreness after 24 h was significantly greater in the placebo group, however natural and pasteurized groups did not differ from each other. But after 48 hours all three groups’ soreness decreased and did not differ. Previous studies found that citrulline plays an important role in reduction of fatigue in the athletes, especially in individuals that perform high-intensity exercise. There is still some controversy about the citrulline aiding in decrease of lactic acid in athletes. Therefore, Tarazona-Diaz et al. decided to look at this biomarker as well. In this study lactic acid of participants in 3 groups was not significantly different.

In the conclusion, this study suggests that watermelon juice may increase athletic performance, and decrease soreness, but remember natural watermelon juice was found to be more bioavailable than pasteurized. So, have some fresh watermelon juice or a watermelon shake before your next workout to increase your performance in the gym and to reduce the next-day soreness. Some great watermelon protein shakes can be made. Try one of our favorites, it is super-simple to make and absolutely delicious, plus it is functional. 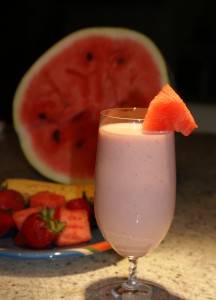