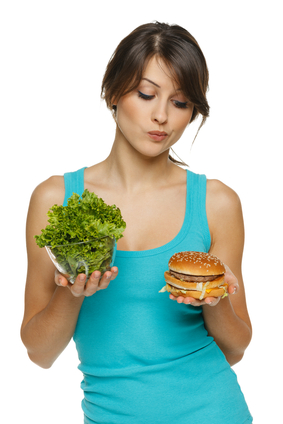 This double blind randomized control trial assessed the behavioral reward system in the brain, as it responded to a novel weight loss intervention. The question posed was: can the brain reprogram to receive greater reward from low calories foods and less reward from high calorie foods through a behavioral weight loss intervention. Researchers found that it can, which is in accordance to previous research.1 However, the study introduced preliminary findings into an infant field of study. As a result, these finds cannot be generalized due to the small sample size and selection bias.
Investigators selected 13 participants from four worksites to participant in a randomized control trial. Control and experimental groups were established. A control group was established through telling the group they were wait-listed for 6 months before beginning a weight loss program. The program aimed to reduce energy intake by 500-1000 kcal/day through reducing hunger and “devaluing existing associations between unhealthy food consumption and reward in parallel with reinforcing associations between healthy food consumption and reward.” Weight management professionals conducted a total of nineteen 60-minute nutrition and support group sessions over 24-weeks with menus and recipe suggestions. Recipes included low glycemic index carbohydrates with high fiber and protein to slow digestion while reducing blood sugar spikes to suppress hunger. This was part of the atypical dietary intervention. Diet included 50% of Calories from low-glycemic index carbohydrates with greater than 40 g per day of dietary fiber. Protein and fat provided 25% of energy. The goal of the intervention was to reduce hunger and food cravings. Magnetic resonance imaging (MRI) assessed the dietary interventions effect on hunger and craving reduction. These scans were done at the start of the study and again at 6 months to determine striatum activity in response to high calorie (HC) and low calorie(LC) foods. High calorie foods were typical foods eaten in a western diet including high energy dense, high glycemic index, and low fiber foods. Low calorie food images were shown consistent with the intervention, which included low-glycemic index carbohydrates and high fiber. Subjects entered an MRI scanner 4 hours after eating and viewed 40 food and 40 non-food images. Each image was viewed for 5 seconds. Subjects then rated the foods on a scale of 1-4, 4 being extremely desirable and 1 as not desirable at all.1
Researchers found that through dietary behavioral intervention, participants had greater anticipation of eating LC foods and had decreased anticipation of eating HC foods significantly (p=0.04). Investigators noted the reward of weight loss and the effects of the specific interventions cannot be separately assessed through this study. Thus making it difficult to determine if results were due to weight loss or change in anticipation leading to possible bias. Additional biases created other limitations. Participants were selected through one of four worksites. This introducing a selection bias toward employed individuals. Out of those worksites, only 13 overweight or obese adults comprised sample size. With such a small sample size, results may not be valid. The positive effects of weight loss many effect how LC and HC foods were perceived not necessarily the dietary intervention. However, It should be noted, investigators did clarify the results are some of the first research in this area. As such findings are the starting point to additional research. The double blind randomized control design did contribute to strengthen the findings.
Although one of the first studies of its kind, its conclusion has was founded on past tested research. Shur et al. (2009) found that the brain has a natural predisposition for high calorie foods. The brain stimulates “energy homeostasis (hypothalamus), satiety perception (hindbrain), reward processing (midbrain ventral tegmental area, ventral striatum), and cognitive control of behavior (orbitofrontal),” in response to foods perceived as fatting.2,3,4 From these findings, investigators hypothesized that the brain has been continually reinforced to ingest fatting foods based on environmental cues. They proposed this process could be reversed. Behaviors that encourage and motivate participants to select lower calorie foods, can be the catalyst.1,2 Such research gives clear support for the study being analyzed.
In conclusion, new research by Deckersbach et al. (2014) has show the brain can be reprogramed to anticipate increased reward from low calorie foods and decreased anticipation stemming from high calorie foods through a behavioral weight loss intervention. Previous research was the bas for these findings. However, in this double blind randomized control trial results are not generalizable due to small sample size and selection bias.

Filed Under: Foods, Nutrition
← Could Yogurt Lower Your Risk of Type 2 Diabetes?
Diet Can Improve Your Insulin Sensitivity →