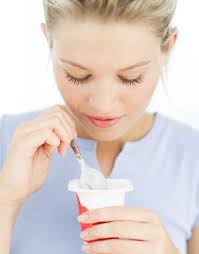 Could Yogurt Lower Your Risk of Type 2 Diabetes?

In the United States nearly 26 million people have type 2 diabetes (T2D). That means that 1 in 10 adults  (20 and older) and 1 in 4 seniors (65 and older) suffer from this disease.[1]  The most common form of diabetes is known as Type 2 which is characterized by imbalanced blood sugar levels due to the body’s inability to pull insulin into cells and lower blood sugar levels. [1] Because diabetes is so common, finding ways to prevent or reduce risk of developing T2D is increasingly important. A study done by Chen, Mu, et al, presented in BMC Medicine found that eating yogurt daily may help reduce your risk of developing T2D later in life. What’s so special about yogurt? It contains healthy, living bacteria known as probiotics which live in your gut and are believed to have many important health benefits by reducing inflammation and improving cholesterol levels.

Researchers have found that those who eat yogurt often reduced their risk of developing T2D. One serving (1/2 cup) of yogurt daily was shown to reduce T2D risk by 18%.2 Yogurt contains several components that contribute to its effect on the body. These include: probiotics, calcium, vitamin D, magnesium and protein. Probiotics are live bacteria that live in your gut and are beneficial to your health. Yogurt contains live cultures of probiotics which have been shown to improve cholesterol levels and reduce inflammation.2

A meta-analysis of dairy consumption and risk of T2D using 3 cohort studies on U.S. adults was published in November 2014. This study included 41,426 men in the Health Professionals Follow-Up Study and 67,138 women in the Nurses’ Health Study. 2 Food frequency questionnaires were used to estimate average intake of dairy products. A second questionnaire was given to confirm diagnosis of T2D. The results showed 15,156 diabetics. 2 Total dairy intake was inversely associated with smoking, hypertension, and hypercholesterolemia and positively associated with physical activity, fruit and vegetable intake. 2 A dose response test was used to determine the relationship between total dairy intake and risk of T2D. Based on the results of this test there was no significant association between dairy intake and T2D risk. 2 Relative risk of developing T2D was used to assess low fat and high fat dairy foods. In the short term (≤ 10 years) total dairy consumption was slightly significant (RR=0.95) but in the long term (≥ 10 years) not significant (R=1.00). 2 Yogurt consumption was associated with lower T2D risk in both short term (R =0,86) and long term (R=0,76). 2 The study concluded that each one serving of yogurt a day decreased risk of T2D by 18%.2

The  research involving yogurt consumption and its effects on T2D individuals has shown the following results. In a double blind randomized trial in 2010 by Ejtahed, H. S., et al involving 60 people with T2D scientists found that yogurt  containing L. acidophilus probiotic versus conventional yogurt was associated with an improved fat profile. 3 Probiotic yogurt was found to decrease total cholesterol by 4.54% and LDL cholesterol by 7.54% compared with the control group. 3 Researchers explained this effect could be due to probiotics fixing imbalances in gut microflora. 3 This study concluded that daily consumption of 200g of yogurt contributed to 2.9% decrease in serum cholesterol.3 In a second randomized control trial, conducted by Ejtahed, Hanie S., et al  researchers found that consuming 300g a day of probotic yogurt containing L. acidophilius bacteria improved subjects fasting blood glucose by 8.68% in patients with T2D. 4 A third prospective cohort study by O’Connor LM published in May 2014 involving 4,127 participants collected dietary intake data using a 7 day food diary and specifically looked at dairy consumption and its association with T2D risk. This study found that greater low fat fermented dairy intake including yogurt for up to 80g day decreased risk of developing T2D by 24%.5 The final study  encountered was a systematic review and meta-analysis by Gao D, Ning N, Wang C, et al.  involving the dose response relationship between dairy products and T2D. This experiment found that low fat dairy was inversely associated with T2D risk (R=0.81) and full fat dairy had no association.6 The amount of up to 300g of low fat dairy per day was associated with the highest risk reduction and more than that amount did not prove to be more beneficial.6 This study concluded that a modest increase in low fat dairy products like milk, cheese, and yogurt may help prevent T2D.6

The original meta-analysis research study this paper is based on was clearly focused and comprehensive. The research methods were clearly described and bias and limitations to the study were clearly defined. Based on the above research results consumers may benefit from eating yogurt that contains L. acidophilius probiotic bacteria. Research has found that low fat dairy versus high fat dairy products to have positive effects on lowering the risk of T2D.