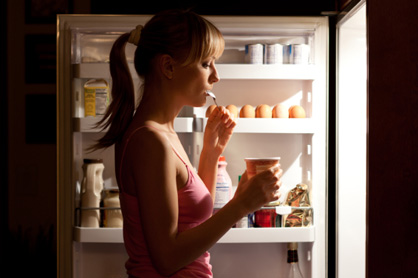 The Easiest Way to Lose Weight and Stop Night Cravings!

What if there would be a way to lose some weight without exercise, supplementation or dieting? What if you could “melt” your body fat by simply eating at the “right time” of the day? Recent research suggests people who eat their most energy of the day during the first part of the day may reduce their weight by about 15 pounds and fat mass by about 10 pounds.

According to the latest epidemiological research, the most calories of the daily allowance come from the evening meals. Why is it a problem? Apparently, food in the morning is the most filling. This is due to the secretion of  hormones that regulate the feeling of being full. When one eats more food in the first part of the day he/she prolongs the satiety feeling (feeling full) to the rest of the day. Eating during the second part of the day does not regulate the satiety hormones which often results in overeating.

Breaking your breakfast meal in halves and split it by 2 hours, instead of engulfing it at once, is another great technique that will keep you away from feeling hungry. Buffernstein and his team concluded that this technique also helps to lower your lunch calories intake up to 26% without leaving the table hungry. Another study suggests that not only time matters, the amount of daily food you consume during the first part of day matters as well.

Lombardo and his team found that participants who were consuming 70% of their daily allowance at breakfast-and-through-lunch (Group-1), lost more weight 18.7lbs compared to a group that ate less food,  55% of their daily intake (Group-2), in early of the day (11lbs). The study was run over 3 month of period with participating 42 homemakers.

All the participants’ diets were assessed and assigned to a 600 Cal/day deficit to each group of participant.  The only difference between groups was how big was their biggest meal of the day that was assigned to be taken before the lunch time.

DEXA was used for assessment of participant’s body composition and fat loss.

The results are promising: Group-1 had enhanced results for weight loss (8.5kg=18.7lbs), waist circumference reduction (7cm=3inches) and fat mass loss (7kg=15.4lbs). Group-2 body weight loss was 7kg, waist circumference reduction 5cm, and fat loss 5kg on average over the course of 3 months. Additional improvements were noticed in both groups, such as blood pressure and lipid parameters were reduced. Also insulin resistance was found twice as high in the Group-1 compared to the Group-2 participant’s average levels.

A way of dieting maybe just got easier.

It is often recommended to reduce your daily intake 500 Cal a day to make a deficit of 3500 Cal per week to lose 1lb/week, or about 0.5kg. By eating most of your meal before dinner you will ensure that you will not have to fight late night cravings that can lead to overeating.

One Response to The Easiest Way to Lose Weight and Stop Night Cravings!