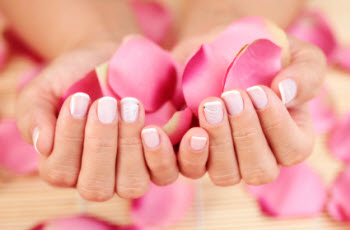 Why Do Nails Split, Crack or Peel? – Possible Nutritional Causes

If you are getting splitting, brittle or peeling nails once in a while, you are not alone.  It seems strange when your healthy, strong, beautiful nails one day start peeling and splitting; and you wonder why that is happening to you.  You are thinking back and wondering what did you change in your daily routine and if you used any harsh chemicals without gloves or if you increased your pool time recently?  “Nope, neither of these”, you are thinking.  So what could possibly happen to you a few months ago?  The answer may lay in your diet.

The bulk of the nail plate is made of keratins which comprise 80% to 90% of the nail plate. Epithelial type keratins account for 10% to 20%. Keratin is a type of protein, the same protein is in your hair or on a bug skeleton. Sulfur helps gluing the keratin fibers together, contributing hardness to nails. Calcium does not contribute to nail hardness (makes up only 0.2% of the nail plate by weight),  which is completely the opposite of what we would expect. The lipid (fat) content is relatively low compared with the lipid content of the stratum corneum (the outer layer of your skin).  Glycolic and stearic acids are nail plate lipids and their presence contributes to the water resistance.  Despite the water resistance, the hydration status of the nail plate is another factor determining its hardness.  The nail plate’s water content can vary greatly, with normal content being 18%.  Nails become brittle when the water content is less than 16% and become soft when greater than 25%. This explains why you noticed your nails losing strength and hardness after excessive hydration, such as swimming in a pool or after taking a bath.  Minerals are another important aspect of the nail plate’s composition; mainly, magnesium, calcium, iron, zinc, sodium, and copper.  Also there are some studies that shows vitamins are especially helpful in keeping nails healthy.

Studies showed that during one’s nutritional deprivation his/her nails would contain low amounts of minerals (such as Calcium, Magnesium, Sodium) and hold the highest concentrations of toxic metals. For example, nail copper concentrations are raised in Wilson’s disease.  Nail arsenic levels can be used to diagnose arsenic poisoning.  Studies have shown significant positive correlation between plasma and nail selenium levels.

Pallor of the nail bed can be a sign of iron deficiency.  Koilonychia (also known as “spoon nails”) is a nail disease that is a sign of iron-deficiency anemia. This disease is highly reported in post-gastrectomy and those with Plummer-Vinson syndrome. Also, occasionally occurs with patients with hemochromatosis. Iron deficiency results in brittle nails, onycholysis and onychorrhesis.

Onycholysis refers to the detachment of the nail from the nail bed, starting at its distal and/or lateral attachment.  It occurs particularly on the ring finger but can occur on any of the fingernails.

Onychorrhesis refers to split or brittle nails, also have a series of lengthwise ridges.

Transverse Leukonychia, also known as white nails or milk spots, is associated with severe hypocalcemia and is treated with calcium.

Onychomadesis,  a periodic idiopathic shedding of the nails beginning at its proximal end, can result from repeated episode of drops in blood calcium levels or a chronic state of hypocalcemia, results in abrupt separation of the nail plate from the nail matrix and nail bed.

Brittle nails with onychorrhexis and longitudinal striations are also associated with hypocalcimia (low level of Calcium).

Hapalonychia, or soft nails, has been associated with a variety of nutritional deficiencies including low serum calcium.

Muehrcke’s nails, nails with white lines that extend all the way across the nail and lie parallel to the lunula, result from low zinc (acrodermatitis enteropathica- metabolic disorder, affecting the uptake zinc).

Transverse Leukonychia (described earlier), brittle nails, onychorrhexis and Beau’s lines (deep grooved lines that run from side to side on the fingernail or the toenail, may look like indentations or ridges in the nail plate) are also associated with zinc deficiency.

Soft flaky nails that are inclined to break and split are associated with the low magnesium level.

Cases have been reported where the fingernails turned white in patients with low serum and urine Selenium levels. Selenium therapy resolves the problem.

Hapalonychia, also soft nails, is associated with deficiencies of vitamins A and D.

Transverse leukonychia of all nails showed a good response to treatment with vitamin B3 (Niacin). Beau’s lines and onycholysis (described earlier) are also associated with vitamins B deficiency.

Hapalonchia, also known as egg-shell nail, condition in which the top of a nail becomes soft and thin causing to bend or break.  Defficiency of vitamin B-6 (pyridoxine) can be associated with this disease.

Nail dystrophy and onychoschizia(splitting of the distal nail plate into layers at the free edge) associated with low Biotin. Study showed biotin treatment helped to improve thickness of the nails, and reduce brittleness.

Splinter haemorrhages (bleeding under the nail appears as red to black thin longitudinal lines under the nail plate), is associated with scurvy, vitamin C deficiency.

Brittle nails can be treated with biotin supplementation (2-3 months), application of essential fatty acids, intake of vitamin C, pyridoxine (B-6), Iron, vitamin D, amino acids and gelatin. Vitamin E may treat yellow nail syndrome. If you are prone to skip meals or if your meals are nutrient deficient, it could be helpful to add multivitamins to your daily intake. There are also some “healthy hair and nails” supplements which contain a wide range of nutrients that are described above. Just remember, not all are equal, please read the labels. Last, but not least important is exercise, the blood flow of the nutrients to your nails will help in “feeding” them with the needed nutrients. Set aside at least 30 minutes a day for your exercise.