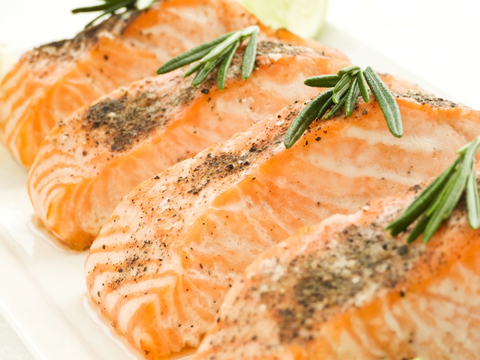 Is Vitamin D Lost During Cooking?

Vitamin D deficiency is of a great health concern for both children and adults. Inadequate vitamin D status is associated with risk for cancer, cardiovascular diseases, diabetes, inadequate immune defense, asthma, allergies and more. Vitamin D is present in foods of animal origin such as fish, meat, eggs, milk and in some types of mushrooms. Nutrition scientists caution that about 80% of population is vitamin D deficient, and endocrinologists estimate this number to be even higher, about 96%. Often some nutrients are lost during cooking. Therefore, some of us wonder if baking salmon for dinner would lead to vitamin D loss in the fish.

According to the latest research published in Food Chemistry journal, boiled or scrambled eggs retain about 80% of vitamin D; where heated eggs in the oven for 40 minutes will reduce vitamin D to 39%. Margarine heated on a pan showed 82% retention, while oven heating showed only 45% retention. When margarine was added to other ingredients and baked in a cake, the retention of vitamin D was 64%. In rye bread, vitamin D retention was about 70%, compared to wheat bread that has a retention about 87%. Negligible loss of vitamin D was shown after cooking and smoking fish or pork. Vitamin D3 in salmon decreased after heat treatment. However, a 150 g (or 5 oz) salmon portion provides between 13.9 and 14.7 μg (around 600 IU) Vitamin D3. Fried mushrooms do not lose much vitamin D either. But cooked beef showed very low retention of vitamin D, only about 40%.

So, exactly how much vitamin D are we talking about? The highest on the list is fish oil; cod liver contains 1,360 IU per tablespoon, raw Atlantic Herring contains 1628 IU/100g, salmon provides around 320-600 IU (3 ounces), and sardines  about 262 IU. When choosing fish, fatty pieces will contain more vitamin D than lean.  Milk has about 100-220 IU/serving, Cereals have around 50- 200 IU (fortified). Mushrooms can have from 160-4000 IU per serving (read more about mushrooms and vitamin D). One large egg contains around 25- 50 IU, and Swiss cheese has only 6 IU per ounce.

The recommended dose for a healthy adult person is 600-2000 IU per day or until a serum level of 35 nanograms/milliliter is reached which is considered adequate for a healthy person. Vitamin D toxicity can cause nausea, vomiting, hypertension, hyperphosphatemia, weakness, mood changes, headache, liver and kidney damage, and, in some cases, death. The Upper Intake Level has been set at 4000 IU (100 μg) for adults. Toxicity is usually seen in people who ingest 10,000 IU/day of vitamin D or more. The maximum vitamin D synthesis from the skin can be reached as high as 20,000 IU. Vitamin D that is made by the skin has a different mechanism, which protects body from over toxicity but unfortunately such excessive amount of sun exposure can lead to risk of skin cancer. Sun exposure between 10 am and 3 pm during winter will provide you with 1.5 IU of vitamin D/cm2/hour, and about 6IU/cm2/hour in summer. It is estimated that with full body exposure to the sun, a fair-skinned individual generates about 10,000-20,000 IU vitamin D in 15-30 min. Sunblocks will block generation of vitamin D.

It could be a good idea to use tanning beds during the winter, and get some sun for 15 min/day without sun blocks from 10am till 12pm or consume fish 2-3 times a week, and don’t forget to expose your mushrooms to UV light.

One Response to Is Vitamin D Lost During Cooking?