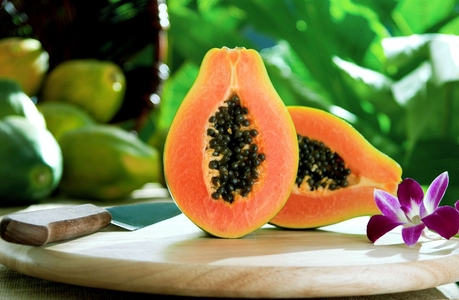 Papaya has been used for medicinal purposes for several hundred years in tropical and subtropical regions, where it is actually grown. It is known in Africa for several famous healing properties, including prevention of miscarriage. This is one of the interesting examples where the old belief is not supported by science. Furthermore, experiments show the opposite is true. There were dozens of studies done on this topic starting as early as 1960, using different parts of papaya and different animals. Study results are pretty consistent:

Females: Papaya abortifacient properties were researched since the 1960s on animal models. Different formulations of papaya, such as extracts of papaya, extract of seed, pulp of unripe papaya, latex and even purified papain was investigated in rat models. Research suggests that papaya latex or unripe papaya extracts prevent implantation and increase post-implantation embryo loss. In later research, papaya latex was shown to induce spasmodic contraction of the uterine muscles of pregnant and non-pregnant rats.

The researchers also investigated aqueous seed extract of papaya on the metabolism of the ovary and uterus of normal rats. The study suggests papaya influenced irregular estrus cycles, uterine contractibility and abortifacient effects on those animals. Whether papaya has the same effect on human is not known. Due to obvious reasons, it can’t be experimentally investigated.

Males: There have been a lot of evidence showing that papaya has antifertility effect on male rat models as well. Papaya seed extract changes contractile pattern of the vas deferens in male rats. Study showed that even a short-term papaya intake influenced androgen deprivation, decreasing the action of male hormone in the target organs causing an antifertility effect.

The authors reported suppression of sperm motility, thereby reducing fertility to zero. The same authors could show full reversibility of sterility in rats without adverse side effects. Basically, papaya extract worked as a male contraceptive on male rats for 40-60 days in duration.

In contrast to these observations, papaya seeds extract failed to exhibit contraceptive effect at any dose when tested on male rabbits. The authors concluded contraceptive effect could be dependent to species. Contraceptive effect of papaya was also identified in monkey models, which was due to the slow sperm motility. It is still unclear if papaya is a safe contraceptive for humans yet. More research is needed to answer this question.

In conclusion, studies suggest papaya may have antifertility and even abortifacient properties in rodent and monkey studies. While papaya was not investigated on human participants, it could be a good practice to eliminate papaya from your diet if you are pregnant or trying to become pregnant. Unfortunately, there were no experimental studies done on using papaya as a contraceptive in humans yet. It could be a next step up in research.