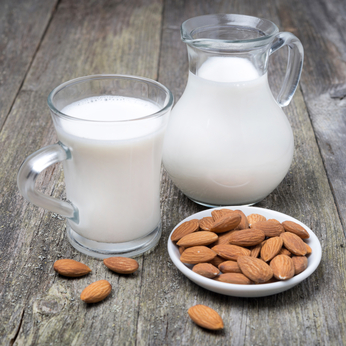 Is Almond Milk Good for You?

Almond milk is made by grounding almonds with water and is often used as a substitute for dairy milk. It can be a great alternative to those that are lactose intolerant because it contains no lactose. For those who suffer from soy allergies, almond milk may be good for you as well because it contains no soy. Those suffering from gluten allergies need not worry, almond milk is without casein (a milk protein chemically similar to gluten). Interestingly almond milk doesn’t contain cholesterol or any animal products.

Almond milk is a nutritious milk substitute. It contains omega-3 fatty acids and is high in protein and dietary fiber. Because a standard serving only has 40 calories, it could benefit those trying to decrease caloric consumption and lose weight.  Unlike soy milk, almond milk doesn’t need to be fortified. It’s naturally rich in vitamin E, selenium, potassium, iron, zinc, phosphorous, manganese, and calcium. You could even make almond milk from home if you wanted!

Filed Under: Diet, Foods, Nutrition, Nutrition News
← Staying Hydrated for Better Performance
What is in your chicken nuggets? →