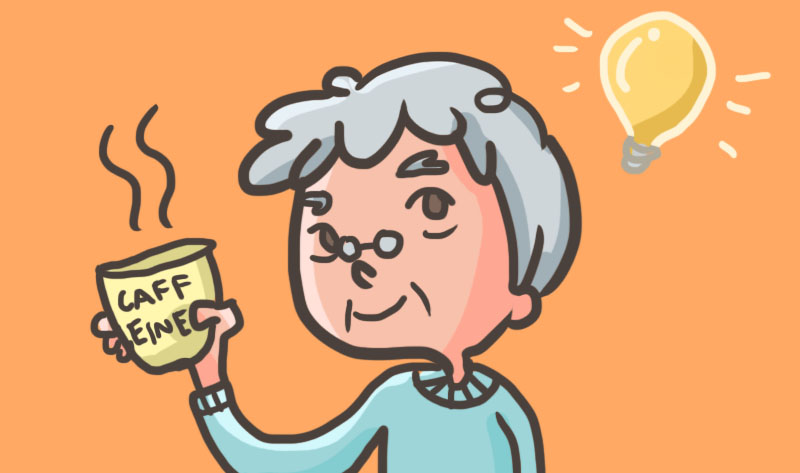 In a recent study published in Nature Neuroscience in January 2014 and entitled, “Post-Study Caffeine Administration Enhances Memory Consolidation in Humans”, researchers examined the effects of caffeine administration on memory fortification after subjects studied certain images (1). Caffeine was given following the study session and after 24 hours, there was a significant increase in memory related specifically to strengthening recall, but not necessarily to any other form of memory retention, including retrieval and basic recognition (1). This study demonstrates that long-term memory can be improved with caffeine intake in humans, but only for consolidation.

Daniel Borota et al. conducted a randomized, double-blind, placebo-controlled trial with a total of 160 healthy and caffeine-naive participants aged 18 to 30 who looked at object images and afterwards were offered either 200 mg of caffeine or a placebo (1). Twenty-four hours later, the researchers evaluated participants’ performance recollection by utilizing “some items they saw the previous day (targets), some new items (foils), and some items that were similar but not identical to ones they saw before (lures)” (1). To investigate the association between caffeine and memory, group comparisons were explored through utilization of unpaired t-tests, one-way, and two-way Analyses of Variance (ANOVA). There was a significant difference between groups (two-tailed P = 0.05). Results suggested caffeine enhanced consolidation due to improvement of distinction during cognitive retrieval (1). In addition, separate dose amounts of caffeine (100 mg, 200 mg, and 300 mg) were administered in a second experiment. Researchers of the study discovered evidence particularly relating 200 mg as the optimal dosage for detecting the improved effect of caffeine on memory consolidation (P = 0.007).

One strength of this study is the design as a randomized, double-blind, placebo-controlled trial and the gold standard for clinical trials. However, the authors identified  possible limitations including subject knowledge of caffeine or placebo administration. To correct for this, the researchers asked each subject’s perception of whether they assumed they had been administered caffeine or the placebo, and the results turned out to be similarly distributed despite actual consumption. Additionally, there was a small sample size (n=10) for the second study administering 300 mg of caffeine, and the increased effect for this dose might have been undermined as a result (1).

Although this study is fairly recent, there have been other studies showing similar, positive effects of caffeine in animals. GA Wright, et al. observed the effects of memories and reward in honeybees and found that when they were rewarded with caffeine (naturally found in the nectar of certain species), they were “three times as likely to remember a learned floral scent than honeybees who were rewarded with sucrose alone” (2). In another experiment, treatment of caffeine in rats considerably decreased age-related impairments of short- and long-term memories (3). Other research regards caffeine more of a “cognitive normalizer” as opposed to “cognitive enhancer” because of its ability to boost memory performance under stressful situations and to “alleviate memory dysfunction in animals models of Alzheimer’s Disease” (4). These data contribute further support to the beneficial effects on memory after caffeine consumption.

Following research analysis, the study, “Post-Study Caffeine Administration Enhances Memory Consolidation in Humans” provides a fairly accurate conclusion based on the study design and scientific evidence found in previous studies. Caffeine, one of the most widely consumed dietary ingredients in the world, is understood to enhance memory consolidation, but the actual processes for how are still uncertain (1,5). In order to perceive optimum effects of memory consolidation, this study shows that consumers would need to consume about 200 mg of caffeine (1). Depending on the caffeine content, this is about 2 cups of coffee or 4-5 servings of soft drinks or tea. It is important to note that the “Journal of Food Science” recommends consuming less than 400mg of caffeine per day (5). While a number of animal studies have been carried out concerning caffeine consumption and memory consolidation, additional research is necessary to further appreciate its effects in humans (1).

Filed Under: Aging, Brain and Nervous System, Foods
← The Skinny On Intermittent Fasting. Does it Work, or Is it Just Another Diet Fad?
Smile! Probiotics are Good for Your Teeth Too! →