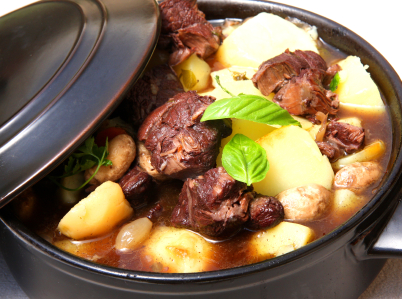 What Happens to Nutrients When Cooking Meat?

Meat is an important source of B-vitamins and some minerals.  Meat is also a source of saturated and polyunsaturated fats. Often while calculating the nutrients consumed, the nutrients are calculated from the raw meat, which is not the same as in prepared meats. Most of us heard that meats are high in saturated fats that may contribute to the heart and vascular diseases. Well, according to the Meat Science journal,  cooked meats have less saturated fat and they also have a better ratio of fats with high polyunsaturated/saturated. Geber et al. suggest that this could be due to triglycerides tending to leach and melt into drippings during the cooking. Thus, if you don’t plan to consume fatty drippings on the bottom of your pan, you are consuming more polyunsaturated fats (such as omega-6 and omega-3) than saturated fats. The total amount of fat (saturated, poly- and monounsaturated fats) was decreased significantly 18-44%, due to the melt of fat during cooking. And if the meat was trimmed prior to cooking, your consumption of saturated fats decreases even more. Though this might be true, the polyunsaturated fat in the meat can be at risk of oxidation (read more on this topic).

It is important to remember, fat contains fat-soluble vitamins such as vitamin A and vitamin E. These vitamins are NOT easy to degrade during roasting or frying, but are lost during boiling of meat. It is suggested that these vitamins may be lost because of fat melting. Trimming the fat from meats is also responsible for the loss of fat soluble vitamins. Losses of Retinol (vitamin A) during cooking reported to range from 10-30%, with the highest loss 30% during cooking in the broth/water. Alpha- tocopherol (vitamin E) was found to be less influenced by cooking, with the loss of 10-20%.

As for the water soluble vitamins (or B-vitamins), Thiamin (B1) was found to be the most susceptible to thermal degradation, up to 100% can be lost during some processing methods. For example, braised veal breast lost 89% of vitamin B1, grilling reduced 75% of the vitamin. Kumar et al.  pointed out that retention of water soluble Thiamine depends on the methods of cooking as well as the type of meat that is cooked. For example, chicken cooked in the microwave retained more B1 (61-64%) compared to roasted chicken in the oven ( 10%). The retention of thiamin may also depend on the type of animal. Kumar et al.  compared meat of fish to a chicken, the microwaved fish retained more vitamin B1 (77%) compare to the microwaved chicken (61%). Heat of  an oven and earth oven is more destructive to thiamin than boiling or pressure cooking. Since Thiamin is a water soluble vitamin, it tends to leach from the product into the water.  In boiled potatoes, the retention of thiamin was found to be 67% while in the pressure cooking it was even higher, 76%. Meat cooked in soups and pressure cooked meats will retain most of their Thiamin. According to Kumar, cooking meats in the microwave is a good idea. The highest losses of Thiamin were found in grilled, oven or earth oven roasted meats. Fried meat was found to have less Thiamin than in pressure cooked meat. Scientists suggest that the heating time is very important, that is why microwaving meats had the best retention of Thiamin, and the oven cooking had the least.

Riboflavin (B2) and Nicotinic Acid were found to have a similar degradation pattern as Thiamin, except that the losses were smaller. Riboflavin and Nicotinic Acid are relatively more stable to heat and acid. Niacin is the most stable of the B vitamins, and was found to retain the highest amounts (about 90%) during different methods of cooking.

Vitamin C that is exclusively found in plants, is easily destroyed by the heat, oxidation and presence of a base. It also found to be lost due to its tendency to leach into the water or broth. It was reported that as much as 60% of vitamin C can be found in water from boiled vegetables. Steam cooking reduces this loss to 20%.

What about minerals? Calcium, Sodium, Potassium and Phosphorus were found to be decreased during cooking. Calcium loss in cooked beef was estimated to be around 30%, in pork- 15%, in veal -33%, Sodium loss is 25-45%, Potassium loss is 30-55%, Magnesium loss is between 15-25%, Phosphorus loss is 20-30%. All the minerals above were found to leach from foods during cooking. Interestingly, Zinc and Iron were found to be increased (up to 17%) in cooked meat compared to raw meat. What is the trick? — Cooking meat must be done in an Iron or a stainless steel cookware.

In the conclusion, I think it is obvious now why your mom makes you home-made chicken soup when you are sick. And why you feel better after consuming it. Water soluble and fat soluble vitamins and minerals tend to leach during cooking. The less time your food is heated the more nutrients are retained in your food. When cooking a soup the leached vitamins and minerals  from foods will not get lost, because they will be consumed in the broth. Cooking meats in the  pots, pressure cooking or broth have a negative side as well, since the saturated fats also leach to the broth. But trimming fats from meats prior to cooking may help to reduce saturated fats in your broth.

Kumar S, Aalbersberg B. Nutrient Retention in Foods After Earth-Oven Cooking Compared to Other Forms of Domestic Cooking.Journal of Food Composition and Analysis.2006;19:311-320.