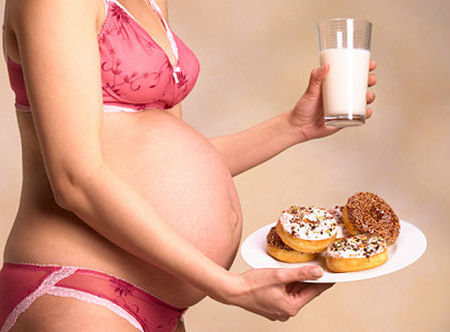 It is known that the periods during pregnancy and lactation are especially important for baby’s prenatal and postnatal development. But could the pregnancy meals be important for baby’s postnatal food preferences? To answer this question, Z.Y.Ong and B.S. Muhlhausler conducted a study at the University of South Australia. Previous studies showed that maternal overnutrition can predispose offspring to later obesity by shifting their food preferences toward high-fat, high-sugar foods, but the mechanism so far has been unknown. Ong et al. hypothesized that natural reward pathway (area in the brain that is responsible for motivation and reward), could be the mechanism that is responsible for it. In adults, palatable, or high-fat, high sugar, foods activate dopaminergic and opioid signaling pathways within the mesolimbic reward system. The activation of this pathway gives sense of pleasure and blocks the physiological satiety signals, which increase further consumption of palatable foods. Therefore, earlier studies found prolonged high amounts palatable foods fed to adult rodents to be associated with behavioral and physiological adaptations, similar with those that seen in drug addicts, in particular desensitization of the central reward pathway, which then drives them to overconsumption of those palatable foods. Knowing that, it is easy to understand why maternal consumption of palatable “junk-foods” can alter function of the baby’s pathway after birth, which would increase overconsumption of palatable foods later in life.

Although the research was done on rats, the study and results hold a big value. Using animals not only helped to detect mechanism in the brain, but also helped to reduce bias during the offspring’s food preferences. This clinical trial has shown that offspring of rats that consumed a junk-food (JF) diet during pregnancy and lactation exhibit an increased preference for fatty foods after weaning, distinct from control group. The study demonstrated that the food preference in the offspring postweaning is influenced by maternal diet during pregnancy and lactation.

Also, the research group found that JF offspring had lower body weights than in control rats group that was healthy fed (HF) in pregnancy. The reduced postnatal growth in offspring of high-fat-fed and obese mothers appears to be due to a lack of essential amino acids for growth and deficits in milk production. The lack of amino acids for baby’s growth in early postnatal life is likely contributed, at least in part, to reduced growth in the JF offspring. Scientists noted that JF dams were found to consume higher amounts of fat and lower amounts of protein, which could explain why during lactation, JF offspring did not receive enough protein. Another explanation could be that JF offspring didn’t receive enough milk due to obese mothers being at high risk of breastfeeding difficulties. Despite the lower body weight in JF offspring, they have higher percentages body fat and deficits of lean muscle and skeletal muscle compared to the control group. The research group also noted that JF offspring increased their protein consumption shortly after weaning; scientists suggest that this could be a compensatory response to the reduced protein intake.

But the key finding of this study was that mRNA expression of µ-opiod receptors was found to be 1.6 folds higher, where the dopamine active transporter (DAT) was found to be 2-fold lower in JF offspring. Maternal junk food feeding resulted in altered expression of key components of the opioid and dopaminergic signaling pathways within the central reward pathway in postweaning and adult ages. This evidence suggest that perinatal junk food feeding is associated with altered development of the neural circuits that govern motivation and reward which could explain increased preference of fat by JF offspring. This was the first study to report changes in the development of the reward pathway following prenatal exposure to a high-fat, high-sugar diet, and further study is needed to replicate these findings. These findings could suggest how obesity became an increasing problem in most industrialized countries and why it is continues skyrocketing today. But the good news, evidence showed that healthy eating dams had offspring with healthy food preference in the postweaning ages. So, eat healthy while you are pregnant, for healthy pregnancy, healthy baby and healthy future.