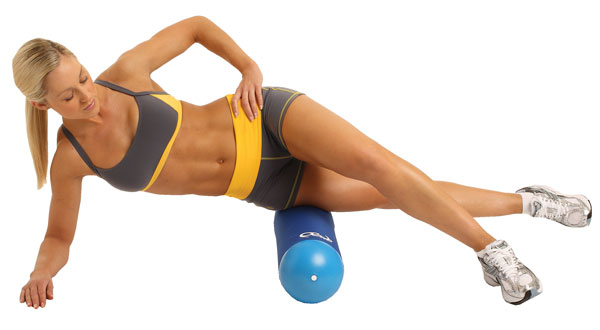 We’ve talked before about different kinds of stretching, and today we add one more to the list: foam rolling. Foam rolling is often referred to as a massage or even a self-myofascial release technique, but we will include it with our stretching since it is usually performed post-workout with cool-down stretching.

While there is currently not much scientific research into foam rolling and its benefits, there is a wealth of advocates with anecdotal evidence supporting its use. The idea is simple; the roller is placed between the body and the floor and used to create a point of pressure on the along muscle.  The American College of Sports Medicine recently published an article addressing the benefits of foam rolling, and their results seem to support what strong advocates for foam rolling have been saying all along.

These researchers concluded that foam rolling helped to reduce muscle soreness (delayed onset muscle soreness from exercise-induced muscle damage) while increasing range of motion, muscle activation, and vertical jump height. It is interesting to note that the researchers believe most of the benefit of foam rolling comes from its treatment of the connective tissue and not the muscle itself. This is because these sections of usually lower blood flow are opened up by the rolling process so more blood can move in.

This is only the beginning of scientific looks into the benefits of foam rolling, and there will undoubtedly be more in the near future as its popularity continues to grow. However, there is no reason to wait for the research to back up what avid gym goers have known for some time now before you give it a try yourself.