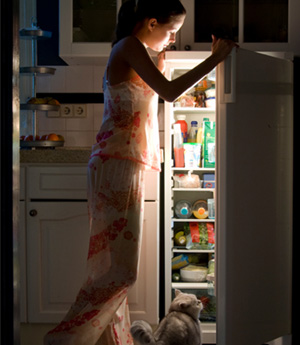 Sleep Deprivation May Cause Your Afternoon Food Cravings, Leading to Obesity

Short sleep duration, less than 7 hours per night, increases the risk of being obese compared to those who sleep 7-8 hours per night. Previous studies showed this association several times, yet could not show a cause-effect relation due to some strong limitations of those studies. The American Journal of Clinical Nutrition published the latest study from New York Obesity Research Center “Short sleep duration increases energy intakes but does not change energy expenditure in normal-weight individuals” which investigated this question once again but with a different approach.
The purpose of this study was to determine whether a reduction in sleep duration (by 3-4h/night for 5 days) would affect food intake and energy expenditure, thereby altering energy balance in normal-weight men and women. The research team was also interested whether appetite and satiety were different between those periods of habitual and deprivation sleep.

There were a total 30 participants (15 men and 15 women) that were healthy, normal weight, 30-49 y/o in this study. Participants had to stay in(control environment) during the days and nights of sleep-study periods, where they were observed and measured. They were also accompanied by a study assistant if they needed to leave, to prevent subjects from sleeping elsewhere. Subjects had two sleep periods (habitual and short-sleep) which were separated by 23 days. Coffee was not allowed during those periods, and all the food that subjects selected was measured and analyzed. The study had very good design and strong control.

The study established very interesting results. Women consumed 15% more Calories, 39% more fats and 62% more saturated fats (animal fats) during deprived sleep compare with the habitual sleep. Men were found to increase their energy consumption only by 9%, fats -10% and saturated fats by 10% during short sleep versus their normal (habitual) sleep periods. Only the percentages of fats and proteins were increased, neither the carbohydrates, sugar, salt or the fiber was changed during the short sleep in the participants. Additionally, it was observed that during short sleep, participants ate more often and consumed about 300 Calories more (similar to serving of a pie) than they did during the normal sleep. The study showed that most of those who ate more often consumed their food after 10pm. Even though, participants increased their consumption during the deprived-sleep period, their energy expenditure (any type of exercise or activities) did not increase. These findings suggest that those extra calories that were consumed were not used up and probably went to adipose tissue (fats). What was interesting is that the lack of sleep took people outside to the sunshine where they were found to spend more time compare to the hours they spent after habitual sleep. It would be interesting to know the scientists speculations on this topic, but they were not provided. Another interesting observation is that even though men were found to consume only 10% more energy on the short-sleep periods (compared to women -15%), men reported less full on the questionnaire during the same time period. It would be interesting to know what kept men from eating, since they reported their hunger.

In conclusion, deprivation of sleep showed to influence increased energy intake, especially saturated fats, where women were affected more than men. This eating pattern may lead to increased risk of cardiovascular disease. In fact, saturated fats were beyond the recommended saturated fat intakes of less than 10% of energy for healthy Americans. This study demonstrates sleep deprivation may lead to increased risk of heart disease, overweight and obesity, especially if there is already predisposition to these health problems.